Gorodok is one of the biggest regions in the country. It is located in the north-east part of Belarus. The region occupies 3.1 thousand square kilometers. The Gorodok region borders on the Nevel region and Usvyaty region of the Russian Federation and the Shumilino and Polotsk regions of the Vitebsk oblast of Belarus. The regional centre is located 30 kilometers far from Vitebsk and 287 kilometers away from Minsk.

The highway and railroad Odessa-St. Petersburg run through the region.

Around 88% of the territory of the region is situated within the bounds of the Gorodok upland. The highest point is 259 meters above sea level. Forests cover more than 40% of the region. The fauna of the Gorodok region is represented by such wild animals as brown bear, wolf, lynx, fox, raccoon dog, beaver, boar, elk, roe, hare, marten, squirrel, polecat and others. The total length of the rivers of the Gorodok region is 695 kilometers. The biggest rivers are Obol, Lovat, Ovsyanka, Luzhesnyanka. There are 162 lakes in the region. The biggest lakes are Ezerische (1687 hectares), Losvido (1167 hectares), Vymno (719 hectares).

Around nine species of rare and endangered plants grow in the Gorodok region (Trapa natans, northern lilium, lunaria, quillwort and others).

Around 30 species of birds registered in the Red Data Book nest in forests and lakesides of the region.

The nature monuments are ling (Trapa natans) on the river of Ovsyanka, the lakes of Tiosto and Ozerki and a huge oak-tree in the village of Prudniki.

There are 184 specimen of history, culture and archeology in the Gorodok region. 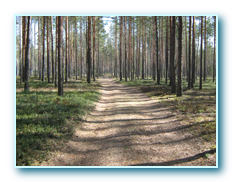 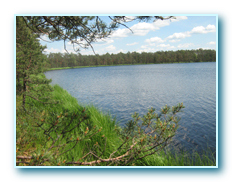